The Filmakademie project CYBERCITY LOVESTORY is more than a sophisticated science fiction series full of breathtaking effects and settings. It shows how the boundaries between film, television, and gaming will continue to shift in the future.

Take a look behind the scenes!

The Plot of CYBERCITY LOVESTORY

The people of the future have settled on Mars. They live in a huge factory-like facility run by a large corporation called the Uncharted Space Company (USC). That's where 15-year-old Elaine was born and raised. Her mother is USC's chief programmer of the so-called ANA-AIs. These sophisticated artificial intelligence systems accompany all humans on Mars as a talking personal assistant. Currently, her mother is working on a new AI system called LILO, designed specifically for the population on Earth.

Elaine is a loner girl whose best friend is her ANA-AI. Like many teenagers, she has a rather problematic relationship with her mother, even though she is the creator of her most important caregiver. One day, Elaine takes a walk outside the facility on the surface of Mars – something that is actually strictly forbidden without authorization. A misunderstanding leads to a heated argument between Elaine and her mother.

After the confrontation, Elaine retreats to her favorite place at Mars Station, the botanical grounds. There she finds an antiquated pair of VR glasses among the plants. It seems that someone left them there for her. When she puts them on, she lands in a world of her own, called Cybercity. This virtual reality is rougher, louder, and dirtier than the world she knows. Elaine immediately gets into a shootout here, yet she is excited about her discovery.

Gradually it becomes clear that Cybercity is a kind of darknet of the future, a space uncontrolled by the ruling system. It also becomes clear that her mother is by no means just the conservative, loyal developer Elaine thinks she is. Rather, she is a whistleblower who wants to expose the criminal machinations of the Space Company surrounding the new LILO-AI. To do so, she has joined a hacker group in Cybercity. However, her venture had been uncovered shortly before she had a fight with her daughter.

Elaine simultaneously adopts her mother's cybercity avatar with the glasses, at first unconsciously. As a result, she is constantly hunted in this world. Fortunately, her ANA-AI navigates perfectly in Cybercity and has unexpected abilities there. Soon, Elaine comes across the hacker group, meets a boy, and gradually finds out the truth. In the real world, Elaine's mother has suddenly disappeared. A breathtaking story unfolds both in the virtual reality of Cybercity and on Mars.

The plot of CYBERCITY LOVESTORY sounds first and foremost like well thought-out, classic science fiction. But the project goes beyond that: With its specific story, it succeeds in creating an innovative link between a series narrative and a video game. The plot that takes place in the VR world of Cybercity is told within a game. In contrast, the story, which takes place on Mars, is narrated in a linear fashion, as in a traditional movie. "What's special about the project is that the storyline runs through both formats", explains director Carly Schrader, whose diploma project is CYBERCITY LOVESTORY in the Scenic Film Direction specialization at the Filmakademie. "So, the story can only be consumed by going through both film and game."

Lane Dabringhausen wrote the script for the series. The twist, according to Lane, is that the audience follows the main character into the game. "As soon as Elaine puts on the VR goggles, they put on the goggles as well and they're in the game." As director Carly points out, this means the game is not an independent "add-on" to the film, as many other media products already are. Rather, by playing the immersive VR game, users drive the narrative.

What's special about the project is that the storyline runs through both formats. So, the story can only be consumed by going through both film and game.

Eddy Schäfer is the game designer responsible for the game. With CYBERCITY LOVESTORY, he is graduating with a degree in Interactive Media from the Animationsinstitut at the Filmakademie. In order to link the gameplay stringently with the film, the team used a trick: "In order to prevent the plot from taking on a life of its own, you don't play as Elaine in the game, but as her AI ANA", explains Eddy. The gameplay is therefore based on assisting the main character as best as possible. Elaine's behavior in the story, however, remains untouched by the players.

Eddy's Journey at the Animationsinstitut

The series pilot, which according to director Carly is expected to be released at the end of 2022, is about 45 minutes long. In addition, there would be about 10 to 15 minutes of gameplay. For a student project, CYBERCITY LOVESTORY is thus unusually extensive. As head producer Yili Baumann and transmedia/game producer Julius Dorsel emphasize, the opportunity to realize the filming on a larger scale is due, among other things, to a special circumstance: "We are lucky enough to be able to shoot in an LED wall studio at the Filmakademie", says Julius.

Visual effects in live-action films are increasingly being created in the film and media industry with the help of high-resolution LED screens. The large LED screens fulfill the role of a virtual stage on film sets. This application of the technology is still in the development phase. The Research & Development department of the Filmakademie’s Animationsinstitut conducts intensive research into new workflows with the technology for about two months a year using its own LED wall studio. During this time, students can shoot their productions with the novel technology. (More information on LED wall sets, can be found here).

A key advantage of LED walls on film sets is that crew travel can be minimized, making shoots not only cheaper but also more environmentally friendly. It can also be used to create extraordinary sets more efficiently and less expensively: "We were able to create stunning images of Mars without going to the desert", Carly enthuses about the new technology, "we digitally recreated part of the real Mars using data from NASA." That wouldn't have been possible with traditional stage design in terms of resources. According to Carly, the screens also allowed the actors to perform magnificently because the computer-generated images can be seen in real time on the LED set and are not only indirectly visible to the performers, as was the case with previous green screen technology. With regard to the impressive shots, the director also emphasizes the performance of Production Design student Anna Vehres. She created the real set design for the project in front of the screens, which makes the shots look real.

Game designer Eddy, who also worked as technical artist on the LED wall set during filming, emphasizes another fortunate factor of the production: "We were able to think bigger about the project because we got additional funding through the AUREA Award." The AUREA Entertainment Award has been bestowed since 2021 as part of a cooperation between the Filmakademie Baden-Württemberg and MackNeXT (Europa-Park). The award is given to "innovative and high-quality student concepts for media/film projects with high entertainment value." The CYBERCITY LOVESTORY team not only won 3,000 euros in prize money in 2021. They also received the assurance to complete the project in co-production with the Europa-Park's Innovation Lab. MackNeXt thus contributed 100,000 euros to the production and may use the series for the Europa-Park VR attraction Yullbe after its completion.

"Thanks to the award, we can currently put a lot of energy into developing the game", says Eddy. A large team is working on it, including students from Hochschule der Medien in Stuttgart as part of a cooperative project with the Filmakademie. Director Carly also emphasizes the help provided by the award: "We were also able to organize professional actors thanks to the money, and we cast them all over Europe."

"The project has a certain role model status for the Filmakademie and the Animationsinstitut", emphasizes Anna Brinkschulte, senior lecturer of the Interactive Media study specialization at the Animationsinstitut. "Consistent transmedia storytelling is an extremely innovative approach", Anna says. It exemplifies the basic idea of the Interactive Media specialization, which is to closely combine cinematic means with other media. She says she is glad that Carly followed her plan so consistently to achieve a coherent union between video game and film in her diploma project. With Eddy, she met someone who could work with her to realize the project at a very high technical level. "Together, the two of them and their team are doing extraordinary things", Anna notes.

The project has a certain role model status for the Filmakademie and the Animationsinstitut. End-to-end transmedia storytelling is an extremely innovative approach. 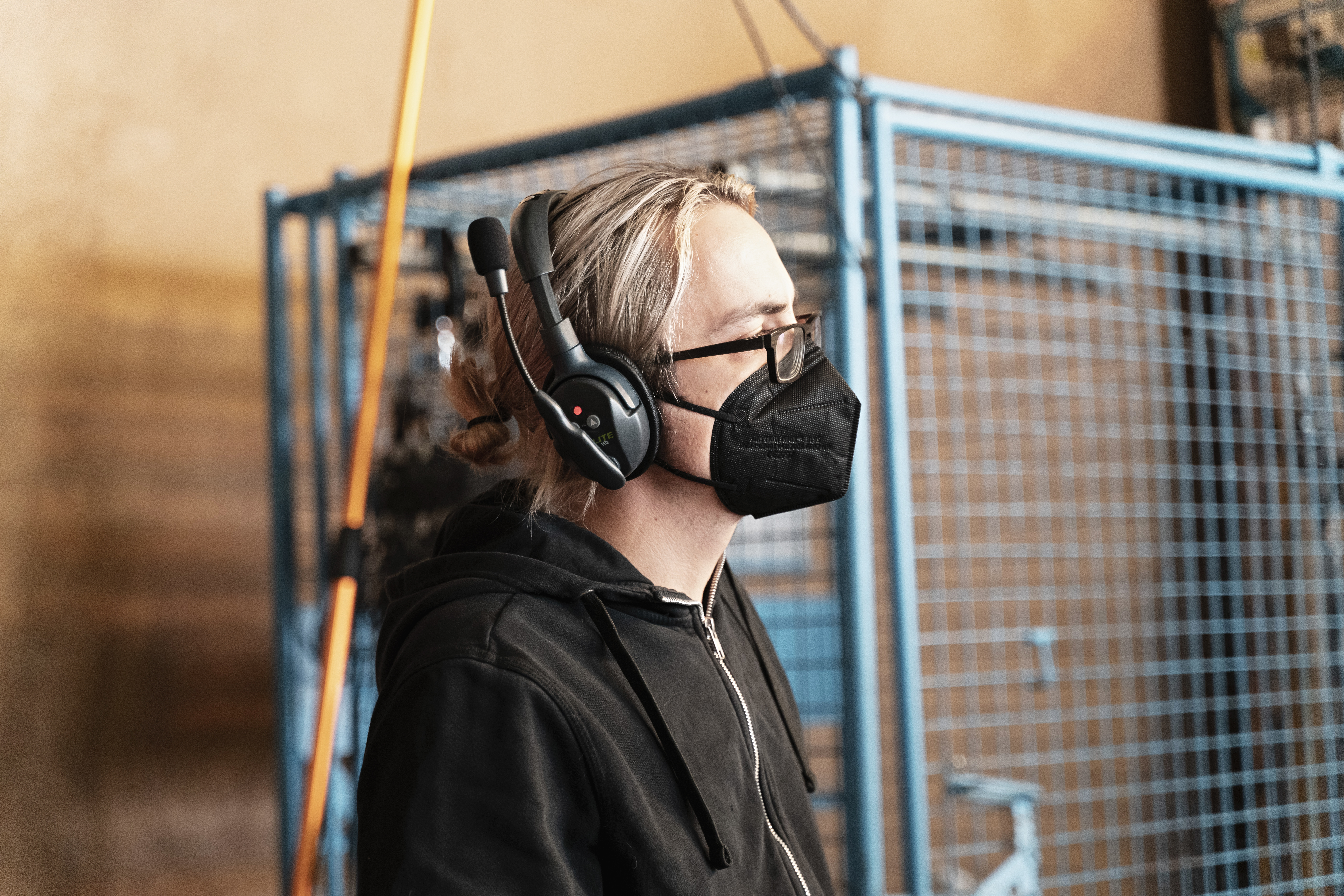 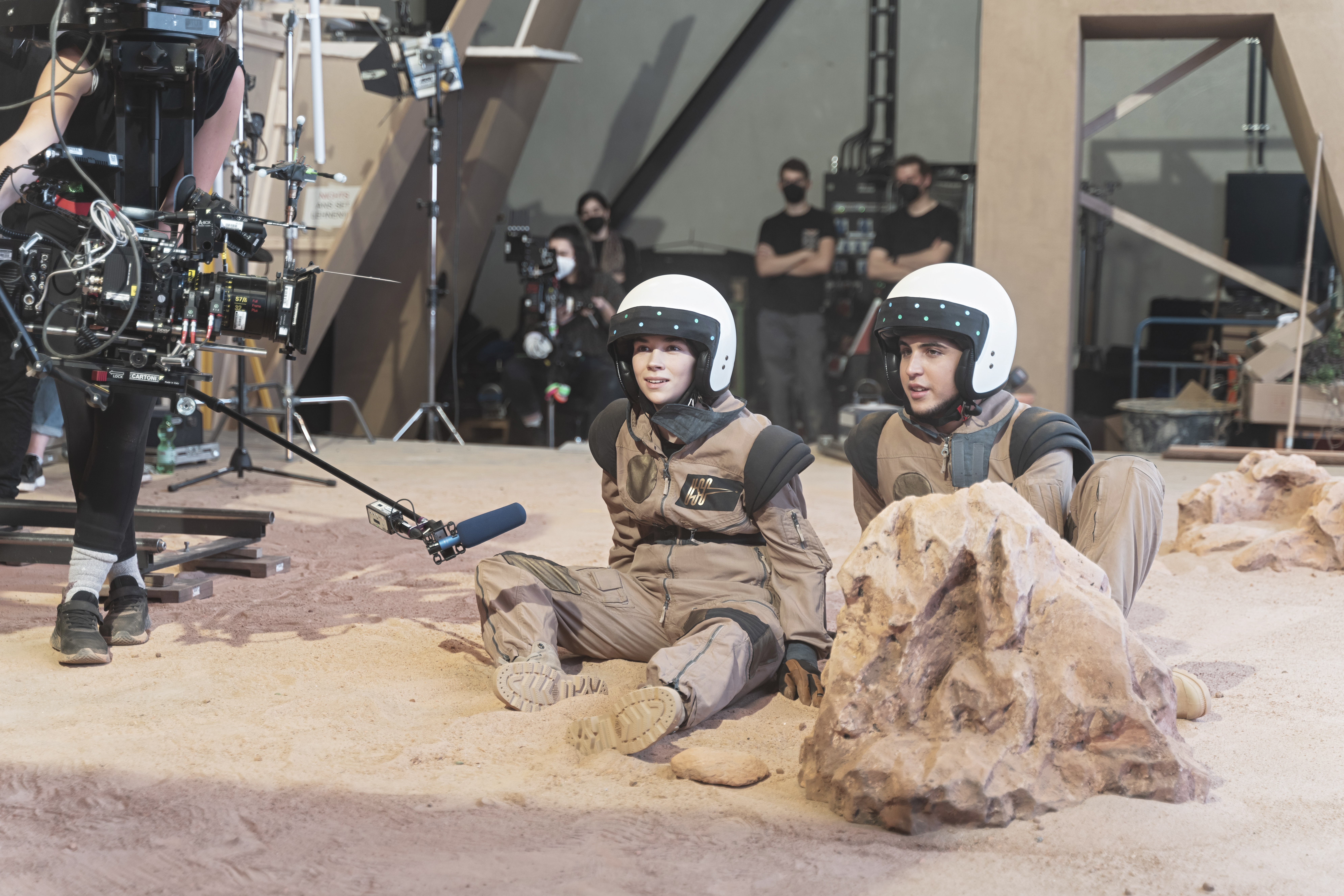 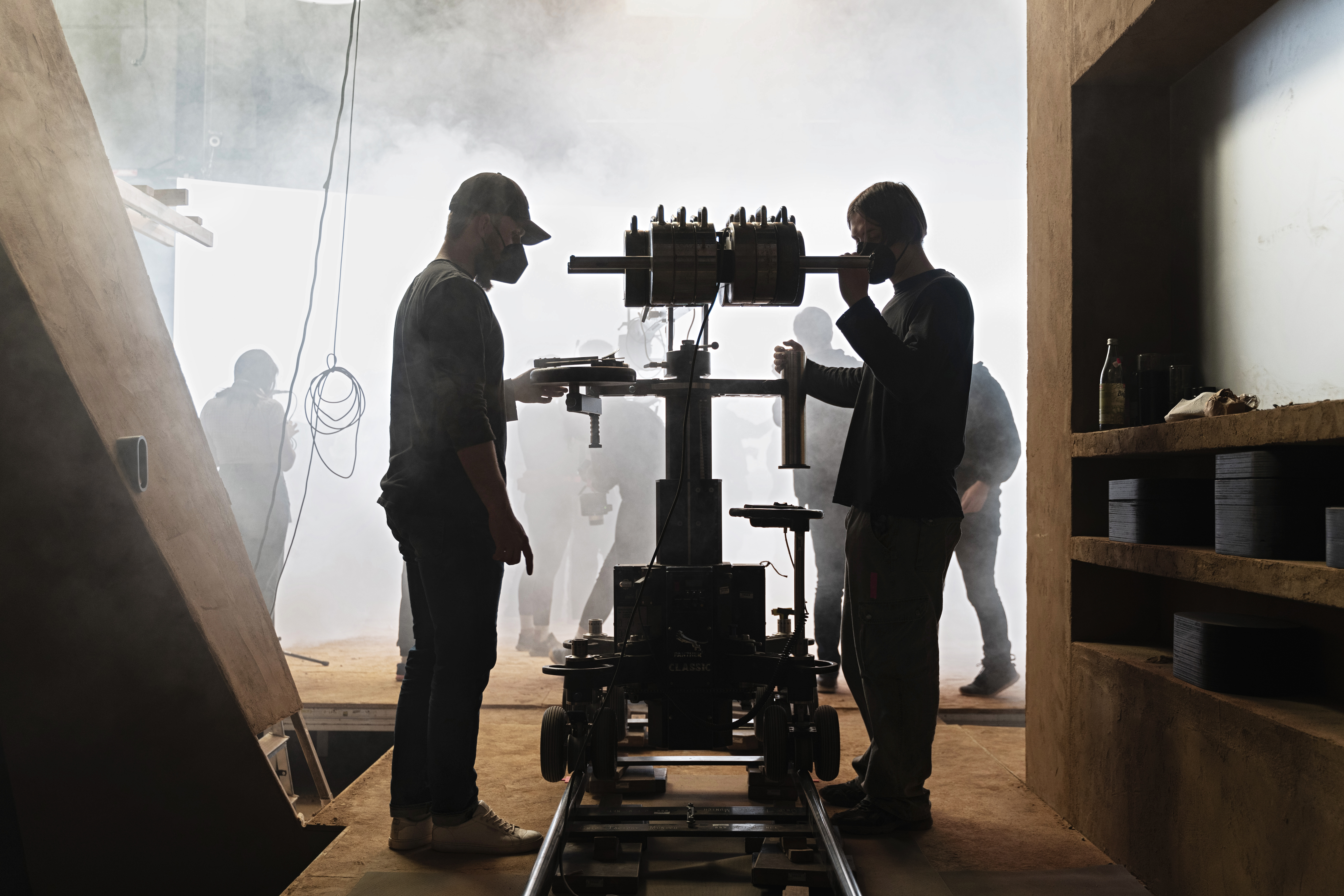 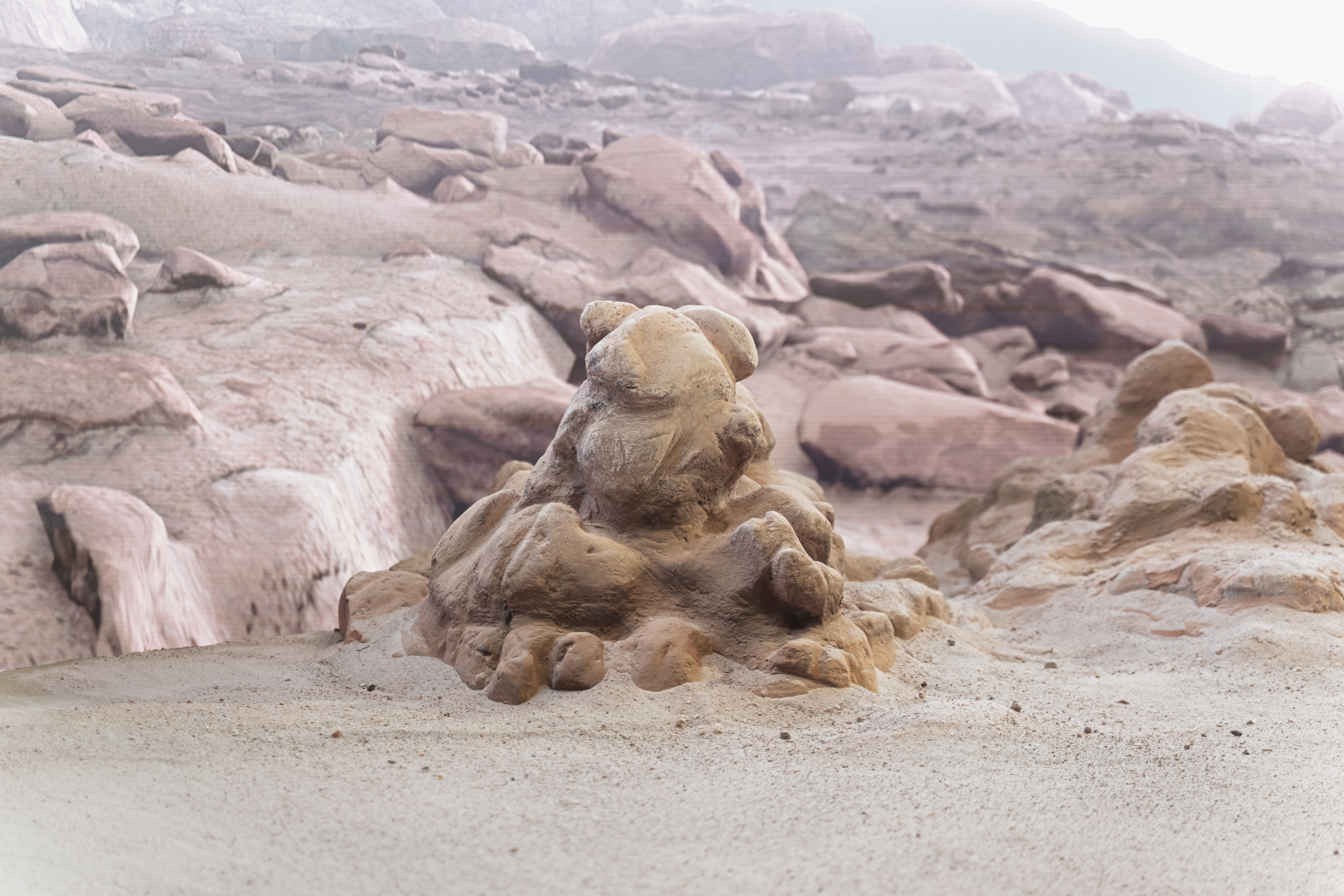 "Basically, we're looking at combining a linear project with an interactive medium", Eddy explains. "We're following the core idea of mixed reality, where things you do in the real world are combined with actions in a virtual world." While the game experience is designed for the Oculus Quest VR goggles, the series doesn't necessarily need to be seen with VR goggles, he points out. A VR Cinema app for TV sets is also conceivable, he adds.

For Anna Brinkschulte, CYBERCITY LOVESTORY is possibly an example of cinematic mixed reality formats that could be encountered more frequently in the future. A market that needs such specific storytelling solutions is currently emerging, she believes. "In recent years, there have been many good ideas for transmedia experiences, but there has often been a lack of infrastructure for them", the lecturer explains. This, she says, has often been too expensive. Thus, no mass market has been able to establish itself. However, the streaming provider Netflix is currently giving her hope. Netflix has recently bought up many start-ups that have developed systems for mixed reality formats. "This indicates that there will probably be some movement in this field in the near future", says Anna.

As a result, she believes the team can pitch to Netflix with the finished project. "I think they have a good chance of continuing the series there." Therefore, we might be hearing a lot more about the extraordinary series project CYBERCITY LOVESTORY soon.

Project of the Month: MINDPALACE

Study at the Animationsinstitut